Star Wars takes over Disneyland with Season of the Force

Things are officially taking place now at Disneyland in preparation for the new Star Wars Land.  The northwestern side of the park is now closed, shutting down for good the beloved petting zoo and Big Thunder Ranch BBQ restaurant.  We will be without Fantasmic, the Disneyland railroad, and Rivers of America for a good duration of time.  Yes, we will miss all of these wonderful attractions, but I think the excitement for what is coming will help make us forget the loss for a time.  And of course, it seems that the force (pun intended) behind the Disney machine is oh so smart to help keep us reminded of what is coming.  They won’t let us forget.  They know just how to keep the Star Wars excitement alive.

Last fall, Disney introduced us to Star Wars: Season of the Force, a Tomorrowland takeover of all things Star Wars.  You can experience it during all operating hours, however I believe that the magic really comes alive when the sun sets.  Walking through Tomorrowland at night you can really see how Star Wars is the central theme, especially with all the lights and projections.  The general non-Star Wars themed attractions are still present in their original themes, including Astro Orbitor, Buzz Lightyear Astro Blasters, the Monorail, and Finding Nemo Submarine Voyage.  Autopia is currently closed for refurbishment and the Railroad is closed due to Star Wars Land construction.  The rest of Tomorrowland has now been enhanced to accommodate the Season of Force.

Here are 7 ways that you can enjoy Star Wars Season of the Force: 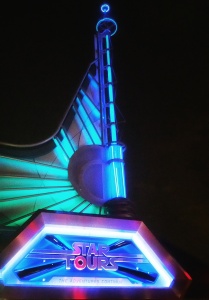 Star Tours has been cozy at home for many years in Tomorrowland, originally opening in the late 80’s, with only one major update in 2011, changing it to Star Tours: The Adventure Continues.  Now you can experience a few new additions to this ride, featuring a new location and character that reference the new Star Wars:The Force Awakens movie…a scene from Jakku and BB-8. 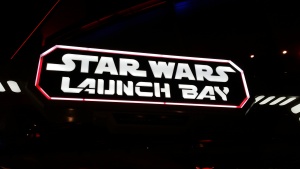 Previously the site of Innoventions, Star Wars has moved into and made itself home on the lower level, where ironically the “home of the future” was displayed.  Here you can see a short film about the culture of creating Star Wars, models, and do character meet and greets.  If you have a Disney Visa Card, you will qualify for a special exclusive character meet and greet.  Please note that the Disney Debit Card does not qualify for this special experience. 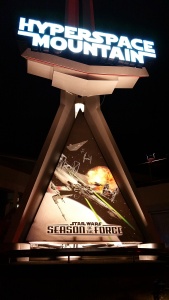 The classic Space Mountain has turned into Hyperspace Mountain, as basic thematic overlay is experienced during the ride, similar to that of the Ghost Galaxy overlay during Halloween time.  You get all the same fun experiences of flying at high speeds through the dark, with a few minor changes to the experience.  The soundtrack follows the Star Wars theme during the incline, along with some other visual changes.  During the ride there are projections of fighters and light effects, bringing you right in the middle of an X-Wing and TIE Fighter battle..  The ride photos at the end are disabled.  This is by far my favorite way to experience The Season of the Force. 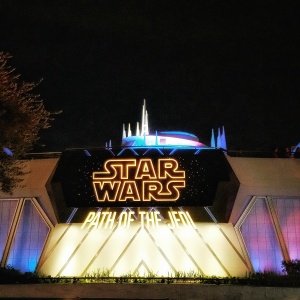 In the Tomorrowland theater, where Michael Jackson used to be getting his groove on in Captain Eo, now plays a deeply moving video collage from the Star Wars movies.  For die hards, its many hero scenes with dramatic soundtrack could almost bring tears to your eyes and give you goose bumps.  Even the casual Star Wars fans will be moved, and will definitely get excited about the continuing saga.

The special Star Wars themed menu at the Galactic Grill, formerly Tomorrowland Terrace, features such intriguing food like the First Order Specialty Burger, served in a Hans Solo carbonite bucket, and is served on a black bun.  For desert you can have Darth by Chocolate.  Sounds tasty, right?  The menu is full of interesting themed entrees and desserts.

For the littles, this is a new version of the old Jedi Training Academy.  It is held during the day at the rising stage of the Galactic Grill.  Parents can beam with pride as they watch their offspring experience the Star Wars culture in a way that makes it fun and relevant for their age group.  Limited to ages 4 through 12.  For times, see the entertainment times guide.  Please note that this new format requires pre-registration at a kiosk outside the exit of the Star Wars Launch Bay. 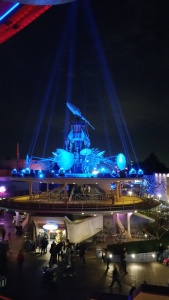 At night, the center of Tomorrowland becomes a source of lighted beams that move and decorate the sky, accompanied by the Star Wars soundtrack.  Many years ago, the Rocket Jets used to sit high atop another retired ride called the PeopleMover (later replaced with Rocket Rods).  Today, the PeopleMover loading station sits unused, and the Rocket Jets platform was replaced by Observatron, a feature that for many was a source of disappointment, and just a reminder of the glory days from when rides actually used to house that site.  It has been updated to use the lights now, making it far more interesting than it ever has been.

For right now,  all the excitement is buzzing for the currently released Star Wars film as construction begins to bring the franchise to a whole new experiential level in its own home within the park.  But after Star Wars Land opens, what is to become of Tomorrowland?  Will a new franchise, like Marvel take over?  Or perhaps a whole new futuristic vision will evolve, similar to that of the recent movie Tomorrowland.  Sometimes I miss the old Tomorrowland that I grew up with, remembering attractions like Adventure Thru Inner Space, PeopleMover, and the Skyway….but as the main man Mr. Walt Disney said, “Disneyland will never be completed.  It will continue to grow as long as there is imagination left in the world.”  Change is inevitable.