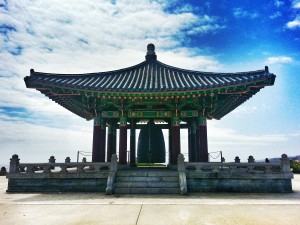 The Korean Bell of Friendship

Sitting atop an overlook surrounded by views of the Pacific ocean is the Korean Bell of Friendship.  It has a beautiful architectural theme that reflects the culture that it symbolizes.  The distinct triangular shaped roof is visible from afar, making it easy to find your way to it once you enter the area.

A gift from the Republic of Korea 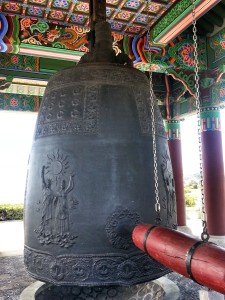 Only 5 times a year the bell is rung, for significant days for both the U.S. and Korea. In January, for Korean American Day; the fourth of July for U.S. independence, and again in August for Korea’s independence day; September for constitution day, and then for the last day of the year, New year’s eve.  It is rung by a giant hanging log that swings to strike the side.  The log is secured by chain to prevent any unauthorized use of the bell.

The bell was recently refurbished for rededication in early 2014.  The allure of the authentically designed structure makes it a unique place to visit.  The colors of the pavilion are brilliantly painted, as you can see when you get close to it.  It is authentic down to the details, where there are subtle features that reflect cultural themes. 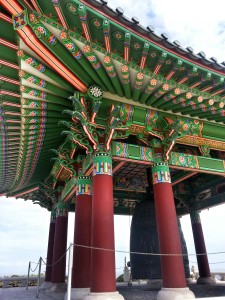 The details in the pavilion of the Korean Bell of Friendship

Visiting the Korean Bell of Friendship

The Korean Bell of Friendship is located in San Pedro, within Los Angeles city limits.  The address is 3601 Gaffey St., Los Angeles, CA 90731.  There is a parking lot off of Gaffey St.  This is a great place to take photos, and it is not uncommon to see other photographers working their magic.

Other interesting sights in the area: 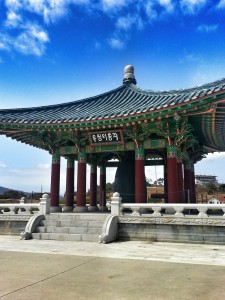