In the very southwestern corner of California is a state park that is unique just for its geographical location.  Border Field State Park is a park named for that location, as it connects to the border of the United States and Mexico where the Pacific Ocean meets our lands. 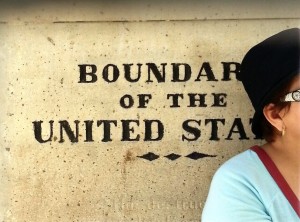 A wall that divides more than 2 countries

When it comes to the border, there is a divide in people’s beliefs politically.  Some people are  an advocate for a wall that protects our borders to keep people from entering illegally.  The other group is more sympathetic, and feel that a wall is a step back in the advancement of human dignity.  Both “sides of the fence”, metaphorically speaking and pun intended, have valid concerns.  I am not here to speak about political agendas, but rather to encourage a visit to this educational place that will no doubt conjure up feelings one way or the other.  You can’t help but feel something when you come face to face with the wall that runs our border. 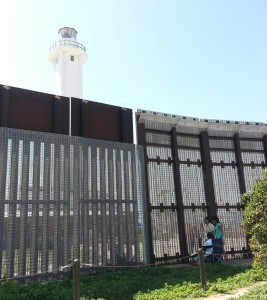 This family came prepared to stay and visit their loved ones on the other side.

A place for visiting

During my visit, there were 2 groups visiting each other through the fence.  One was a lone woman on the U.S. side, socializing with her friends on the Mexican side of the fence. Another was a family, visiting for so long that they had brought a chair to sit in during their visit.  They also had loved ones on the other side.  Although this may be a place considered for visiting, the environment for doing so can be a challenge.  The original fence had enough space that objects could be passed through, or an embrace of an arm.  It has been covered over with an even smaller fence, where the holes are now just barely big enough to touch fingertips. 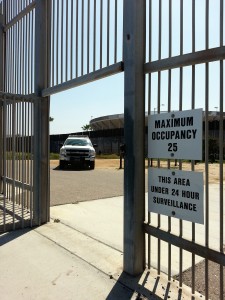 Although the area is under tight security, the border patrol agents try to promote a feeling of welcome.

A warm welcome by Border Patrol

As expected, there are border patrol agents everywhere.  They patrol up and down in their vans, but there are also agents that are supervising the visiting area within the 2 fences as people visit this highly secure area.  We were greeted by a very cordial border patrol agent, who kindly welcomed us to the park.  He asked if we had ever been to the park, and then proceeded to show us the main areas.  I guess for some reason, I expected a very stand-offish demeanor, but actually received just the opposite.  The agent who greeted us made every effort to make us feel welcome, and even gave my daughter a marker to leave her mark in the rock garden.  It was a refreshing welcome, since the feeling of the high security can be like that of a jail.  The agents also allow the space and freedom for people to visit privately with their loved ones. 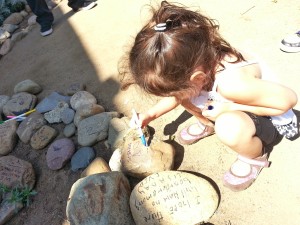 Just off to the side, is a garden of large rocks, that are arranged and displayed neatly with all sorts of names and markings.  This is an area that people may feel free to write their names, the names of a loved one, or a peaceful message.  The border patrol agent actually had markers with him, and offered it for my daughter to leave her mark. It is an effort to make the space feel more welcoming. Here is a picture of her writing on a rock.  She really enjoyed it! 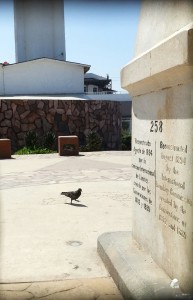 Border Monument 258 is on the Mexico side of the fence

Border Monument 258 marks the site of the U.S./Mexico border on the westernmost side.  It is no longer accessible from the U.S. side, however it can still be seen through the fence. When I was there, it acted as a back rest for a woman on the Mexico side visiting a loved one on the U.S. side.  The area where the monument sits is referred  to as Monument Mesa.  It states “Reconstructed 1894 by the International Boundary Commission created by the Conventions of 1882 and 1889”, written in both English and Spanish.  The original marker was numbered 1, and made of marble, however it had to be reconstructed due to wear from people chipping off pieces of it.  When it was remade, it was also renumbered 258, which at the time was numbered the last.  This was also the site of a dedication ceremony for Friendship Park held in 1971 by then First Lady Pat Nixon.  Friendship Park is the name given to the area within Border Field State Park, that includes Monument Mesa. 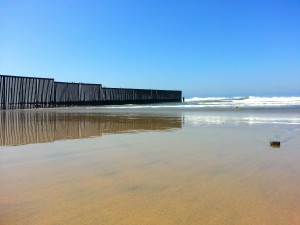 A wall was erected even in the ocean

An Ocean Without Boundaries

Despite the high security and the jail like feeling of Friendship Park, there is still the beauty of the ocean. The wall spans into the ocean, as if it somehow divides the very waters that flow through it. On the United States side, people are not allowed to go near it, yet on the Mexico side, people play freely on the beach. Our side is remote, pristine, and quiet. Only the sound of the waves is heard. Occasionally you may cross paths with another visitor to Friendship Park, or a horse with his rider. Because of its remote location, it is not a beach that people would typically visit just for leisure. Most people  that you may encounter  are either going to or from Monument  Mesa, or a horse back rider strolling for enjoyment. There are lots of horse properties near the parks entrance, so it is quite common to see horses. 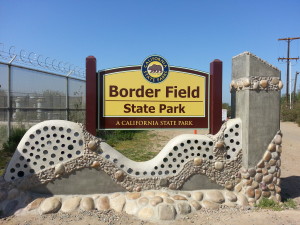 As if the remote location in the most southwestern corner isn’t challenging enough to get to, the entrance to the park is generally  closed to vehicles.  The closure is due to a flooding problem on the road to Friendship Park inside. Although the gate may be closed, it is still open for pedestrians and equestrians. There is a large dirt lot to park in by the gate. From that point,  it is about a mile and a half walk to the border fence. If you find the gate open, consider yourself lucky. I would expect it to be closed, so make sure that you are prepared for the walk, including hats, sun protection, or comfortable shoes that may get sand in them.  I also have pictures at the end of this paragraph that show where you will be walking.  The first segment is on a paved road. You will eventually get to a fork in the road, where the paved road curves to the left, and another trail runs straight ahead. The trail running straight takes you to the beach, where you will then head south to the fence. This is the recommended path to the border by the park, however you can continue walking on the road. If it has rained anytime recently, the beach path may be the better option. If you continue on the road, you take the risk of dealing with the flooding.  With that being said, we still chose to stay on the road to see what was ahead. After the road curve, you will head south to the border, where you can see expansive  views of the fence on the hills. The road will again curve, this time to the right. It is just after this second curve that you will see the issue with the flooding.  There is a small dirt path through the field on the righthand side that you can use to avoid the flooded road. We had no problem getting around, and it was dry on this little path the whole way. Again, please be mindful if there have been any recent rains that may have softened this trail. From the looks of it, this is a very commonly used path, as it is very easy to find. Eventually, you will head up the hill towards Monument Mesa. There will be a wide paved road heading up to the hill. Once you get to the top, you will see the 2 fences that make up Friendship Park and Monument Mesa. The area between the 2 fences is where you need to be to get close to the actual border fence.  The hours to get inside the fenced area are very limited. The gate is only open from 10am to 2pm on Saturday and Sunday.  Only 8 hours per week can you actually touch the border fence. Because of the effort  put into reaching  this location, I recommend  making sure that you visit only at this time.  Getting to the entrance of Border Field State Park from Interstate 5 is easy.  I-5 south, taking either the Tocayo Ave exit or the Dairy Mart Rd. exit.  If taking the Tocayo exit, head west on Tocayo, then turn left on Hollister St. until it ends at Monument Rd.  Turn right onto Monument Rd. until the entrance gate.  Dairy Mart Rd. turns into Monument Rd. if you choose to take that route.

Border Field State Park is a highly educational place that will no doubt provoke some type of feelings.  It is well worth the effort to visit if you happen to be in the San Diego area.  Again, remember that access inside Monument Mesa is very limited, and I encourage visits only on the weekend, and in the morning.  Please allow enough time to walk the mile and a half to get to the fence. 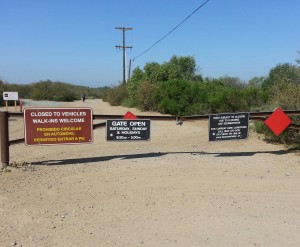 Most likely the gate will be closed, so prepare to walk 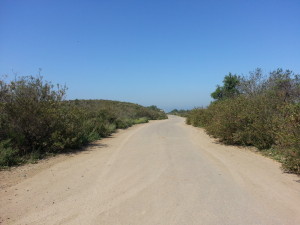 The road walking into the park 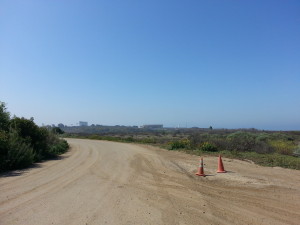 Fork in the road as the road curves to the left. Path to the right goes to the beach

There is a path to walk around the flooding 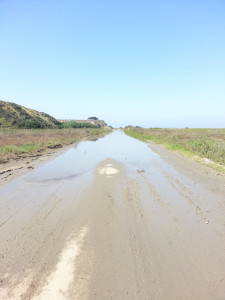 This is the flooding that causes the gate to be closed 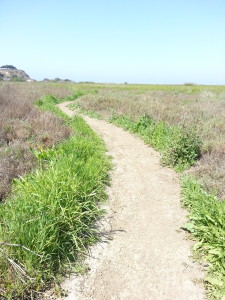 The path is pretty clear walking around the flooding 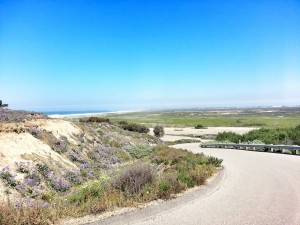 The final hill up to Monument Mesa, looking back 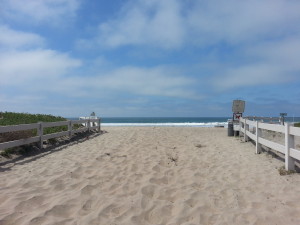 If you take the beach path, it will eventually end as marked by white fences 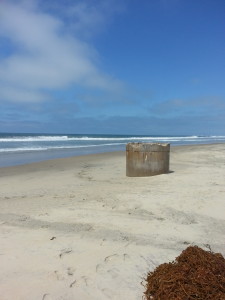 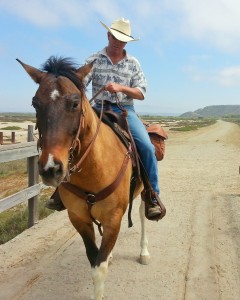 You will probably see horseback riders in the area 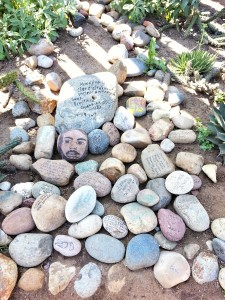 Another picture of the rock garden

Related articles across the web