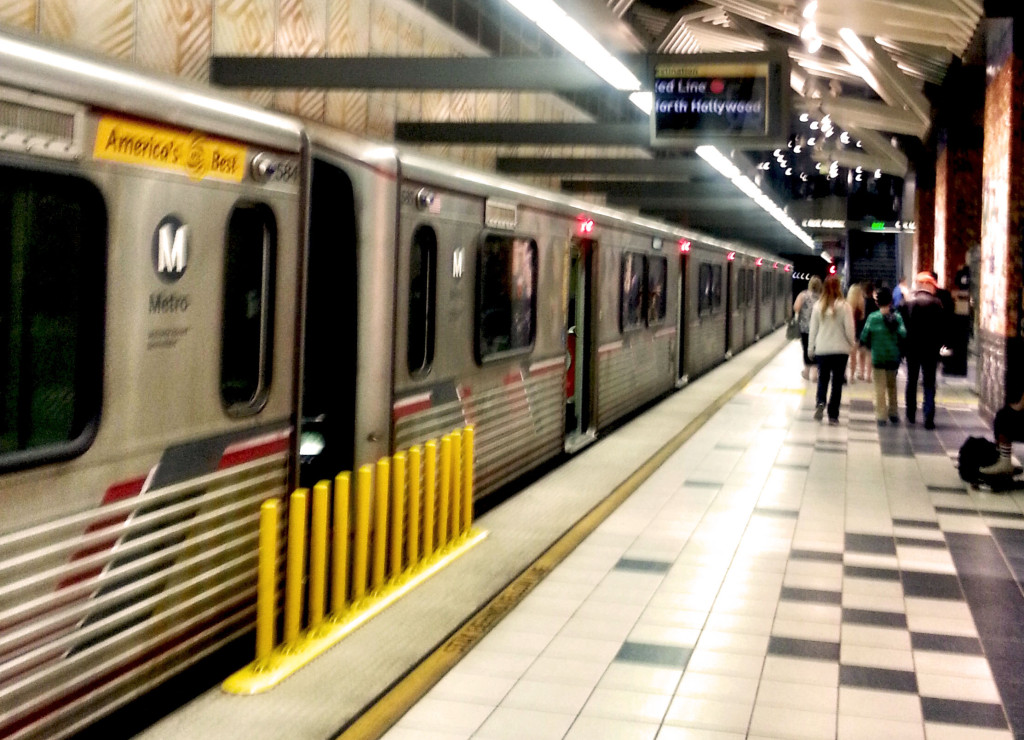 When the movie Speed was released in the 90’s, featuring Keanu Reeves and Sandra Bullock, one of the jokes of the time was that Los Angeles residents learned that Los Angeles actually had a subway.   It seemed that it was made merely for the sake of the plotline of the movie, that the subway was only just fiction.  But it wasn’t.  That was the beginning of the advancement of a public transportation light rail and subway line in Los Angeles. Today, many more people are aware of the train system here in the city, but many people still prefer to rely on their cars.  For with our sprawling freeways, it seems as if the town was made for using our cars.  In fact, that was the joke of another 90’s movie, L.A. Story starring Steve Martin, in one of the best scenes of the movie, where he gets in his car to literally drive just 2 houses down.  Many people though do use the train system for their regular commutes, as you will see especially if you ride Monday through Friday.  It is a great option for commuters who just don’t want to deal with sitting in traffic, or paying exorbitant fees for parking downtown.  But the Metro Red Line isn’t just for workplace commuters, as it can also be a simplified route for dealing with high traffic congested areas such as Hollywood.

The Red Line to Universal Studios 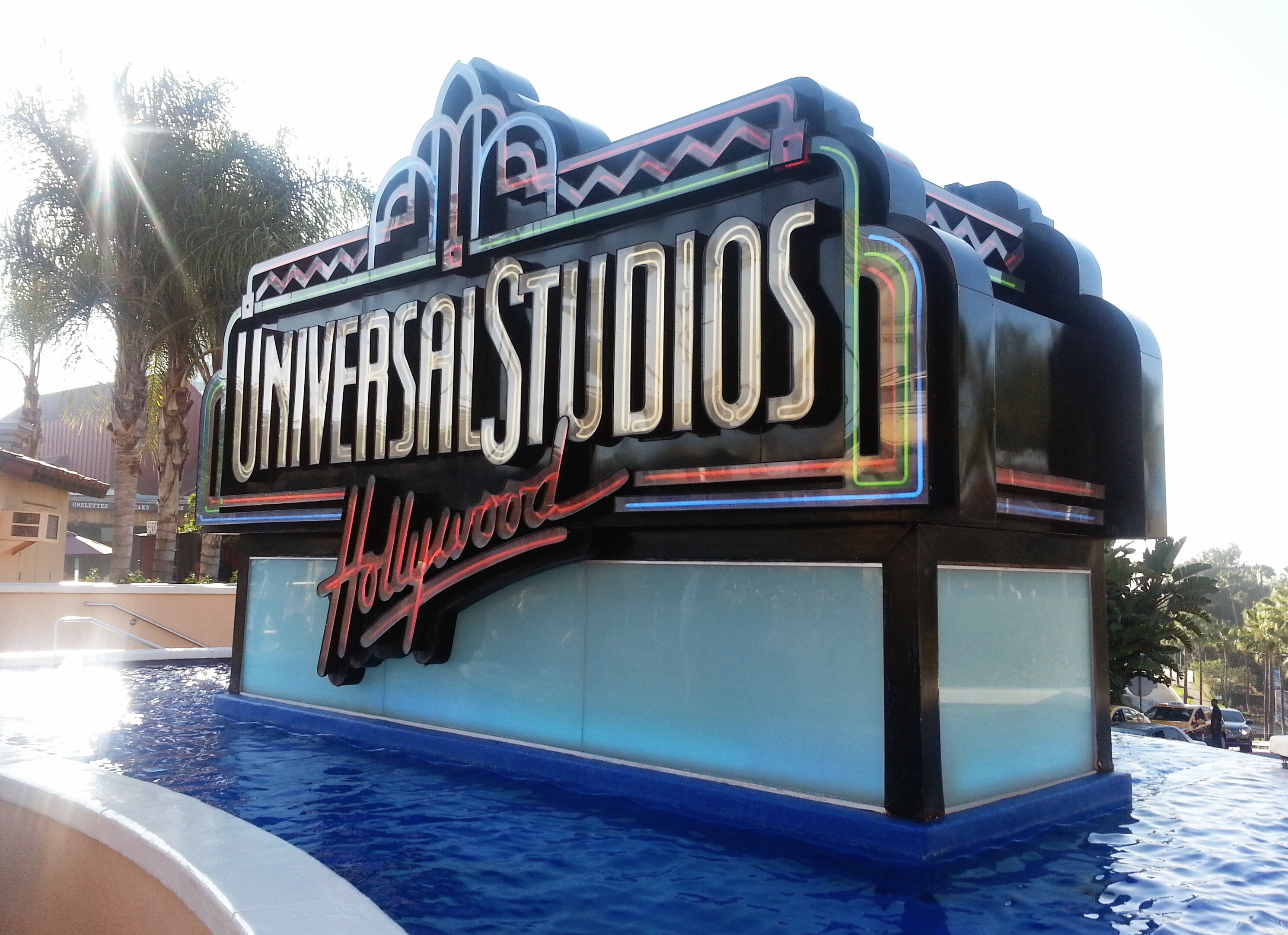 Taking the Red Line is easy, and the park is accommodating for the many people who choose to not take their cars. In fact, so many people take the Metro Red Line that I’ve read “to just follow the crowd”  to find the tram to the park.  Here are some clear directions to find the way, just incase there aren’t any crowds to follow.  I went on a holiday, and even though the park itself was very crowded, the Metro tram up to the park was comfortably full.  In other words, even on the busiest days, it will be easy to use without a  lot of hassle.  Take the Metro Red Line going towards North Hollywood.  You will be on it for awhile, as the stop for Universal Studios is the second to the last stop.  Just after the Hollywood and Highland exit, you may want to gather your things, because the next stop is the Universal/Studio City stop.  The stops are brief, so it is best to be prepared to get off immediately once the doors open.  Once exiting at the Universal/Studio City stop, you will head towards the left once on the train platform.  You will see people heading this direction.  You can go up the escalators, or if needed, continue that direction on the platform to the end to the elevator.  You will go all the way up to the top, towards Lankershim  Blvd. 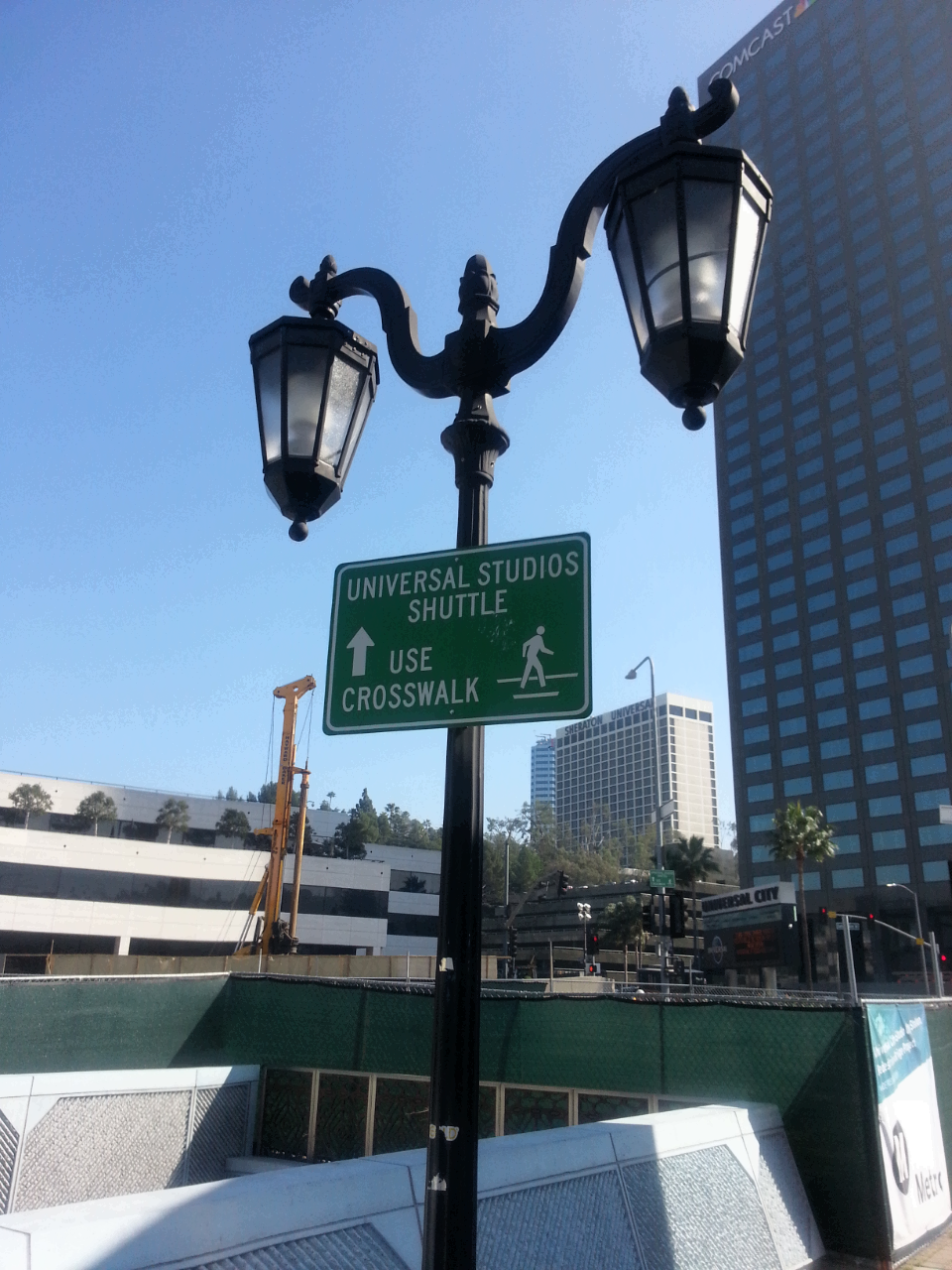 Clear directions to the tram from the Metro Red Line

Once exiting,  there you should see plenty of signs with arrows that show the direction you need to go.  Head towards the street corner of Lankershim Blvd. and Campo de Cahuenga. You will need to cross the street, first crossing Lankershim, then one more time crossing Campo de Cahuenga.  After crossing the streets, start to walk up towards the hill.  You may even already see people waiting for the tram, or the tram parked.  They run very often, so you won’t have to wait very long.  When I was on the tram heading up, there was already one heading back down.  There is handicap access in the first car and plenty of space for strollers. 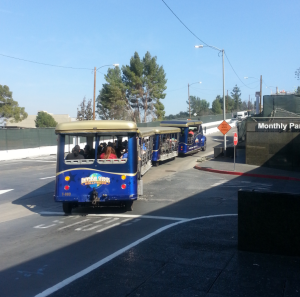 The tram to Universal Studios for Metro Red Line Riders

Once on the tram, you will ride up the hill and around one of the parking lots to the tram stop at Universal City walk.  Once getting off the tram, there is a restroom very close, just in case you need it.  The tram leaves you at the park end of Universal City Walk.  It is very close to the main entrance gates.  It is very convenient, and runs often.  Even with a stroller, I found it very easy to use.  To return to the metro, simply return to the same place that the tram dropped off.  They will drop you off at the same place that you boarded, where you will return the same way you came when going back to the Metro station.

The Red Line to Hollywood Blvd.

Just one stop away from the Universal Studios Metro stop is the Hollywood and Highland stop.  This is the stop to take if you want to be right in the heart of it all.  Head up to the street level and you will be greeted by all the hustle and bustle of big city action. 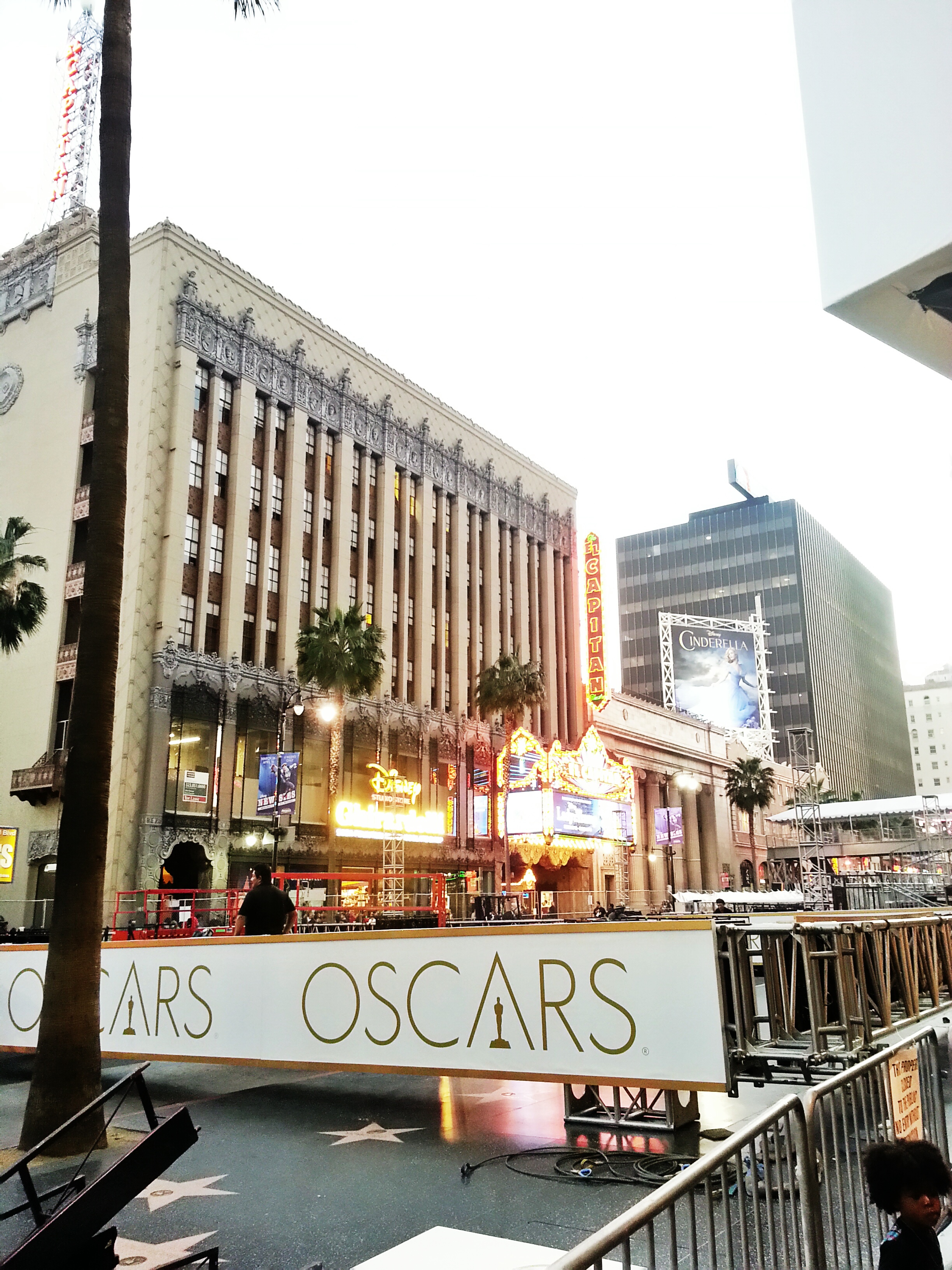 View when arriving at street level from Hollywood and Highland Metro Red Line stop. This time of year, Hollywood Blvd is getting ready for the Oscars

The shopping plaza will be right there on the corner, and you will be able to see El Capitan theatre and Disney’s Soda Fountain across the street.  This picture was taken less than a week before the Oscars, so street traffic was closed in preparation for the big event.  Despite the street closures, activity still swirled all around, both tourists and locals alike keep doing their thing.  Not too far down is the Dolby Theatre, site of the Oscars, followed by TCL Chinese Theatre.  There is much to see in the block between Highland and Orange, being the hub of the Hollywood action.  This is a high traffic area, and trying to navigate among the many tourists with a vehicle can be quite a headache.  Most of the time I have used my car to come to this area, but this time, it was a relief to not have to deal with traffic and finding a place to park.  This will be my choice of transportation in the future when I go to Hollywood.  In this area, you will find the Dolby Theatre, Mann’s Chinese Theatre, Madame Tussaud’s , El Capitan Theatre, Disney’s Soda Fountain, and The Hollywood Walk of Fame.  Along with the major attractions, you can find tour buses that will take you on tours around the city.   This stop also has a connecting shuttle if you are planning on attending a performance at the Hollywood Bowl.

Dolby Theatre, home of the Oscars

Use a TAPS Card to Ride the LA Metro

You will need to purchase a TAPS card to ride the Metro system.  Cards are available for purchase for a small fee from numerous vending machines at the station.  You can reload them as needed, depending on your usage.  TAPS is rather straightforward, and you will be able to see how to use them watching the numerous other riders.  Basically you take your loaded card and briefly “tap” it to the sensor as you pass through the turnstiles.

From Union Station to North Hollywood 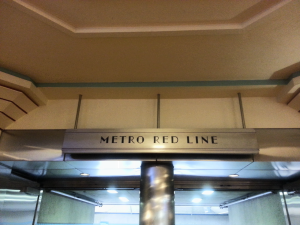 The Red Line begins at Union Station in downtown Los Angeles.  You may need to catch a connecting train or bus to get there.  The LA Metro system has light rail or bus as options.  There is also the Metrolink system, which is a separate train system that runs out to the suburbs.  Metrolink requires a different ticket, but it can be TAPS compatible.  To find a station that is near you, you can plan your trip using the handy planner that is provided on the LA Metro website.  It may seem like a little work to try using the transit system at first, especially if you have never used it before.  As with learning anything new, the first time will be a new challenge, but you can become a pro like all the other commuters buzzing around.  It is a fun and unique experience that is not an ordinary Los Angeles experience and it will lead you to many great destinations along the way. It is also perfect for little ones who love trains! Leave your car behind next time and let the journey be your destination.